"The Professor's diary" is an "escape book" written for "Money heist" fans. I was surprised when I found out it was published in Poland (the original is in Spanish and I'm not sure there even exists an English version) and even more surpsised when I found it in my local library. Of course, I picked it up straight away. 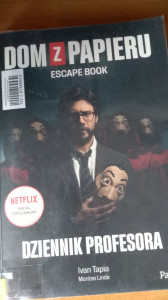 Today, at 7 pm BST, you can watch "Jesus Christ Superstar" with Ben Forster, Tim Minchin and Melanie C for free on youtube! The link, with a short teaser, is here: click! It will be available for 48 hours. I have it on dvd but I'll still be watching. One of my favourite parts is when Jesus says during the last supper that one of his apostles will betray him, and Judas asnwers: "Cut off the dramatics, you know very well who".

"La casa de papel" ("Money heist") has an interesting story. It aired on tv in Spain with its two seasons, wasn't a huge success, but then Netflix bought it, re-cut the 70-minute episodes into 45-minute ones, presumably did some marketing and it become a hit - so big they decided to make three more seasons of it and now we're waiting for the last one. And while those two seasons made by Netflix had some great moments, I think they lacked what originally made the series great: ambiguity.

There are some spoilers below, but I'm not mentioning any names.

I still have things to watch on my list, but I'm so fickle I got into other things.

A new series from Russell T Davies, "It's a sin", is out. Set in the '80s, it's about a gay community in London at the time AIDS began to spread. I watched four episodes yesterday and the last one today and wish I didn't because it's over now.

While Steven Moffat focuses on one (brilliant and alone) person in every of his shows, RTD is all about a group of people and relationships between them. In "It's a sin" it's a group of friends who live together and create a family: a family that accepts you whoever you are and never judges you. Acceptance seems to be the key for a better world according to RTD, along with kindness. In his shows, people fully accept who they are, accept their friends and family, are nice to strangers and have that sense of humour that doesn't feel forced (unlike characters in shows of some other writer mentioned in this paragraph, who seem to spend their time offscreen by coming up with funny oneliners) or mean (unlike characters in shows of some other writer...), but is fun and uplifting. I love how Davies writes those scenes when friends banter or some stranger shows their support. Some people are close-minded, selfish and hypocrite - hello, antagonists - but even they can sometimes change. Davies is known for bringing bad events to his characters: alien invasions on Earth in "Doctor Who", climate catastrophes and evil politicians in "Years and Years", AIDS in "It's a sin" - but they can overcome dark days and deal with tragedies because of people close to them. This is where the strength and warmth comes from. And Davies is brilliant in balancing between sadness, hope, joy, fear and tragedy.

So, people die for AIDS, but they also live a life before it happens. In every story, Davies writes that one monologue that says us what the story was about. In "Years and Years", it's the grandmother's speech about humanity; in series 3 finale of "Doctor Who", it's Martha's speech about belief just before the Doctor gets out of the cage, and so on.[Spoiler (click to open)]Here, there's Ritchie's monologue about living his life the way he wanted and not regretting anything. Of course you can agree or disagree on that, but it's a conclusion Davies makes - people who can't accept their gay sons, neighbours and collegues, who force them to live in shame and hide, they are more dangerous and deadly than AIDS.

There were some stories I didn't expect to go the way they went,[Spoiler (click to open)]like the one with Colin's job. I liked that the boss backed off in the USA and Colin didn't become  a victim of sexual harassment (it's something that tends to define characters in tv shows and there's that rule about a gun that has to be shot. I liked that the boss was part of the story, but not that important as we may have expected). Then you might think Colin is going to have trouble because he lost his job, but another surprise, he finds a new one straight away. When you think he's safe, he has the first seizure attack - surprise!

I loved the choice of music and the bits composed for the show. It shouldn't be a surpsise because Murray Gold was responsible for it. I'm also a fan of light, colourful shots. Add colourful costumes and beautiful actors to that and you get a feast to the eye.

For a moment, I thought Stephen Fry was going to play himself :D What a great bunch of actors. Neil Patrick Harris was good and the actress who played Jill has an aura of charm, warmth and love.

[Spoiler (click to open)]When I thought the biggest link between "It's a sin" and "Doctor Who" will be the song "Tainted Love", they mention Derek Jacobi (who was in "Doctor Who" in RTD era) and then... show Ritchie in an episode of "Doctor Who" :D It could have been any tv show, but hey, if we can have Daleks, why choose something else?

I recommend it to everyone who likes good drama.

"The Boys" was on my list so long that I forgot where I heard about it, but I wanted to watch it because it corresponds better with my vision of what superheroes would be like in real world than Marvel movies. In "The Boys" superheroes are celebrities who work for a corporation and everything they do is supposed to increase its income. Experts choose the heroes's actions, other people manage their social media and write stories and speeches for them - it's 100% controlled and planned. The superheroes are selfish, manipulative, depraved, violent and cruel, except our protagonist who is good, pure and selfless. That isn't what I'd nessesarily wanted to see - it's very simple and black and white (for example, Jessica Jones was more complex and nuanced character), but the creators clearly preferred things exaggeerated (like physical violence which is absurd sometimes). Still, it was entertaining. I watched only season 1 and I'm taking a break from season 2 for now.

"The Boys" reminded me of "Jessica Jones" not only because of the superhero theme, but the actresses who played Robyn and Hope in JJ were in "The Boys", too. Now I checked that season 3 of JJ is out since 2019 and I'm surprised I didn't hear about it. I won't be watching, I only watched season 2 because I couldn't believe it could be so bad, but it's good to know the show is over now.

dieastra I've watched a movie called "Denial" about a case of Holocaust denial. I'm surprised I haven't heard about this movie before, it's quite new and has scenes shot in Poland, why wasn't it in the cinemas here? It's a good movie with great actors (Timothy Spall, Andrew Scott, Rachel Weisz, even Mark Gatiss was there), and even if it seems unlikely that Deborah Lipstein would be so naive and ignorant about how court works and how people like Irving behave - of course you don't get the actual survivors of the Holocaust to testify and get dismissed by Irving - it wasn't overplayed by some dramatic, emotional decisions. I think this is my favourite quote from the movie - the actual danger of Irving's actions is not that a bunch of people would believe him, but that a lot of people would think it's an unresolved matter and some historians say it happened and some say it didn't.

It was funny that Atlanta was a sunny place while there was always raining in London - except when Deborah was going for a run :)

Some scenes were filmed in Auschwitz-Birkenau and the images took me back to my visit in that place when I was about fifteen. They told us at school that it could be shocking and overwhelming because we're young. I took it well, but only because I thought Holocaust was an effect of some bizzare cosmic error when humanity stopped working for couple of years. I couldn't really get it. I understood the political, sociological and psychological aspect later and then I was frightened, and felt a few years older.

You know the 80's nostalgia? I'm immune to that, but I totally have a 2000's nostalgia. "I May Destroy You" is a great series I'll write about when I'm finished watching, but in episode six there's a flashback to 2004 where a student has a mobile with a camera and everyone is so excited about it :D and I was so excited about the flashback. I have a smartphone and I like when tv shows show characters using Google Maps (and I really don't want the world without Google Maps to come back!), but show me a mobile from the early 2000s on screen and that feels familiar. Or - I loved Clara's dresses, I could wear some of them myself, but again it's Martha in her bootcut jeans who feels familiar and relatable. I also like last seasons of "Friends" more than the first ones, set in the nineties (partly because some old episodes just wouldn't happen in a world with mobile phones). I wonder how I'll feel in ten years. And when tv shows set in the early 2000s will appear, like "Stranger Things" is now.

Doctor Who: Revolution of the Daleks

This. I'm glad I wasn't the only one!
I know they are siblings so they are supposed to look similar, but still.
Collapse